After attending Kenneth Hagin’s campmeeting in Tulsa, Oklahoma for many years. Pastor Jimmy Jones was inspired to hold our first Campmeeting in June 2003. The theme for our first Campmeeting was “Harvest Time for the End Times.” With anointed speakers like Reverend Watts (a former instructor at Rhema Bible Training Center in Broken Arrow, Ok), Reverend and Mrs. White (from Decatur, Al), and Reverend and Mrs. Waycaster (from Ridgeland, Ms), it was a Spirit filled meeting. It was an awesome time of worship, praise, refreshing renewal, and life changing Word. This Campmeeting was the spark that started the fire for future Campmeetings to come. 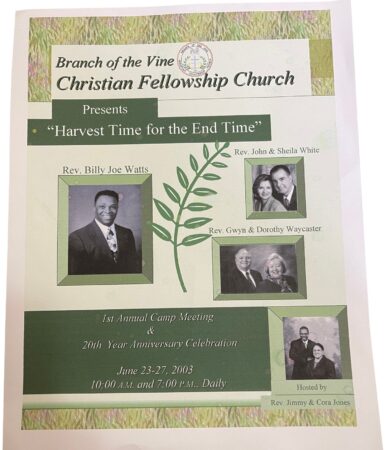 Over the years we have had both national and international speakers. We have had Dr. Michael Freeman from Temple Hills, Md, Dr. James Payne from Nashville, TN (international singer), Dr. Nasir Siddiki from Tulsa, OK and Bishop Emmanuel Botway from Ghana, Africa. We have also had local, well known speakers such as Bishop Bobby McCarter of Crawford, Ms, Bishop C. L. Parks of Tupelo, Ms, and Dr. Terry Weems of Columbia, Ms just to name a few.

One of the most special and memorable Campmeetings was Campmeeting 2015 when Bishop Jimmy Jones and all six of his sons spoke during that week. Also during this Campmeeting, our special guests were Scott and Ellen Coone. They ministered to the six sons and one son in law with number seven being the number of completion. They also ministered to the grandchildren who were ages 7-15, and they in turn ministered to the people.  This was such an awesome year of Campmeeting where we saw Proverbs 22:6 in full effect, “Train up a child in the way he should go, and when he is old he will not depart from it.” This was a phenomenal Campmeeting where the power of God moved.

Every Campmeeting has a theme which is given to Bishop Jones by the inspiration of the Holy Spirit. Campmeeting 2005 theme was “The Year of Overflow”. In 2008 it was “Season of Abundance”. “From Glory to Glory” in 2014 and “Fulfill the Divine Call: Go Ye” in 2018. The theme and the services held during Campmeeting set the tone for the rest of the year.

Over the years Campmeeting has grown and people’s lives have been impacted through these services. This year is our 20th Campmeeting and our theme is “You Shall Recover All” (1 Samuel 30:8 AMPC). We believe that this will be the best one yet. God has a message for His people and you don’t want to miss it. 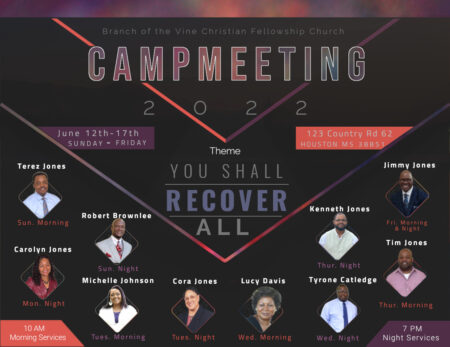 Sunday Morning at 10 am, our speaker will be Minister Terez Jones. He is the second son of Bishop and First Lady. He is head of the music and song department at CFC. He and his wife, Natoya who is a Corporate Training Manager, have three children who are also active in ministry. They reside in Oxford, Ms.

Sunday Evening at 6 pm, we will have Pastor Robert Brownlee who is the founder of Agape Baptist Church in Louisville, Ms. Pastor Brownlee had a unique experience. He was attending a revival at the church where he was a member. During the service, Holy Spirit told him to leave and come to CFC where they were having a service as well. While at CFC Pastor Brownlee received confirmation concerning his call into ministry. Holy Spirit told him to go back to the service he’d just left and announce that he’d been called to preach.

Tuesday Morning at 10 am, we will have Minister Michelle Johnson. She is the daughter of Bishop and First Lady and is Chief Financial Officer at CFC. She and her husband, AJ, who live in Oxford, Ms, have three children who are also active in ministry. They own Onebody by AJ and BossLady’s Designz.

Tuesday Evening at 7 pm, First Lady Cora Jones will be preaching. She is a woman of many talents filled with the Fire of the Holy Ghost. Pastor Cora is a mother of seven with six of the seven children active in ministry. She is also a grandmother of twelve with ten of the twelve grandchildren active in the ministry at CFC.

Wednesday Morning at 10 am, the speaker is Minister Lucy Davis. She is a home grown minister and faithful member of CFC. She is the wife to George, mother, grandmother, and foster parent to many. She and George own several rental properties and are entrepreneurs.

Wednesday Night at 7 pm, our speaker will be Minister Tyrone Catledge. He is also a fellow member of CFC and is a leader in Tupelo Public Schools. Tyrone sings with the praise team, does church announcements, and is part of the finance committee.

Thursday Morning at 10 am, Minister Tim Jones will be speaking. He is another home grown minister, and the Lord has led him to ministry at his job. Tim and his wife, Kelly, are teachers at CFC of children ages 2-7. Three of their seven children are active in the ministry at CFC.

Thursday Night at 7 pm, we will have Minister Kenneth Jones. He is the third son of Bishop and First Lady and is a musician and youth teacher at CFC. He is also establishing a mentorship with a fellow member at CFC, Tez Catledge. Kenny and his son Jabrae enjoy fishing, hunting, and playing their saxophones together in the CFC band.

Friday Morning (10am) and Night (7pm), our very own Bishop Jimmy Jones will deliver the Word. Bishop Jones is the founder of Branch of the Vine Christian Fellowship Church and this year is the 39th anniversary for CFC. Bishop Jones has been in the ministry for 48 years and over the years he has impacted the lives of so many. He is a father of seven, grandfather of twelve, and husband of First Lady Cora Jones. He is a skillful man who loves hunting and fishing but He loves the Word most of all.

We hope you will come join us for this year’s Campmeeting. We pray that you have an ear to hear and a heart to receive the message that God is going to release to His people. We are excited for what Campmeeting 2022 holds. Hope to see you here where…

YOU SHALL RECOVER ALL

This site uses Akismet to reduce spam. Learn how your comment data is processed.